IRF/Mock: All the results from this past weekend’s ultramarathon and trail races including Dipsea results (more on that later), the Lithia Loop Marathon in Bend (great race), Allie Mac wins another trail race, and my buddy Reid takes the win at Rio Del Lago 100 miller. Kaci ran RDL as well and shared on her Instagram post that she tore her calf muscle and had to walk the final 20.

Probably the wrong crowd for this, but do you really need to take a shower every day? Harvard says nope.

The LetsRun MENSA team bitches about ultramarathons again. They’re too loooong, they said. Too much gear! It’s not real running! And on and on.

Didn’t get to watch any of the NYC Marathon, but I caught this clip of Tommy Rivers Puzey smiling and walking and that’s all I needed to see.

There’s a special place in hell for people who desecrate or tag natural spaces.

I shared part of Alex Flynn’s journey earlier this year–he’d been living with Parksinson’s while taking on massive feats of physically demanding adventures–but sadly, his time on earth has ended.

Ultrarunning Mag: Thank you to the volunteers and thank you to everyone for this awesome sport. 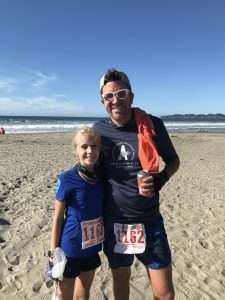 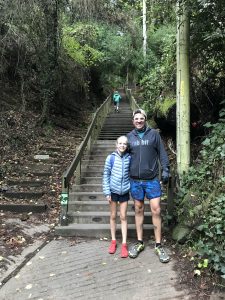 Sunny and I both ran the Dipsea Race—the oldest trail race in the country—for the first time yesterday. Here’s AJW’s piece from last week on the trail. Though I’d run the trail dozens of times, it’d never been in a handicapped race format with 1,000+ other people! And boy did it not disappoint! What an incredible adventure that was highlighted by bluebird weather, good friends, and hey, I felt pretty decent the whole way! She had an eight minute head start on me but beat me by significantly more than that.
Going into it, I was primarily concerned with two things: One, Sunny tends to get a bit aggressive and fearless on technical terrain and I didn’t want her wiping out and getting hurt too bad. She had a blast and the incredible support she received was heartwarming.
And more personally, I was worried about my vision on the descents. Much of my lower peripheral and vision has deteriorated, so when I run technical terrain, I have to look straight down at my footsteps, which means I routinely hit trees and branches because I’m not looking “up.” Over the past two years I’ve adapted by finding a runner with a bright shirt to track behind and that’s what I did yesterday. Scary as hell, but so much fun! Wiped out twice, but didn’t go into the mud once…success!
It’s already on our calendar for next June…now we just have to get in!