Back at the end of January 2022, I had a post up about how the National Transport Authority (NTA) had allocated €4.3 million for the construction of a new bridge over the N40 South Ring Road in Cork City. This new bridge will connect the Tramore Valley Park to the Grange & Frankfield areas of the city.

At the start of this week, Cork City Council issued a press release about the new route. In this post, we’ll have a look at that in more detail. 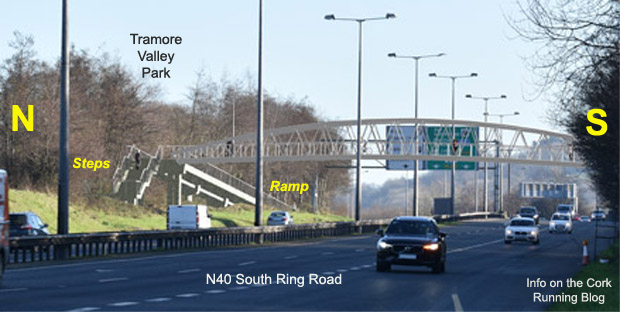 There was a photo with the press release giving an artists impression of what the bridge might look like. I’ve enlarged this a bit and added in some text to explain where everything is.

On the left, you’ll notice that they have a ramp and steps for the access to the bridge.

The text for the press release reads…” Work is to begin on a pedestrian and cycle path and new bridge which will provide a safe, sustainable and alternative travel route between Grange and Tramore Valley Park and onwards to Douglas and the city centre.

Funded by the National Transport Authority (NTA), the kilometer-long pathway, which includes the construction of a new bridge over the N40 South Ring Road, will provide connectivity between Grange/Frankfield and the southern suburbs and will support residents, students and commuters to opt for active travel and thereby reduce traffic congestion.

The four meter wide pathway will also support people with mobility needs and will include environmentally sensitive public lighting.”

As with a lot of press releases, it was heavy on waffle and text but not really good at explaining clearly what it entails.

First up, here is a map showing the proposed route from Frankfield to Half-Moon Lane… 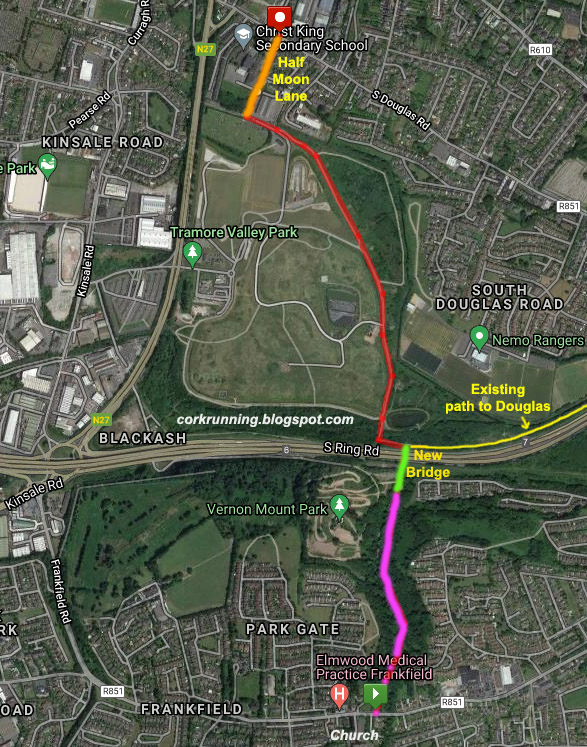 We’ll start at the top and work down.

The Orange part is Half-Moon Lane which connects the Tramore Valley Park to the South Douglas Road. I covered this in a previous post.

The Red part is an existing path within Tramore Valley Park. There is a gate at the bottom of this which is locked during hours of darkness.

The Green is the new bridge. Note how it crosses to the existing path to Douglas in Yellow and this is outside the park. It suggests that this route to Douglas will be open 24/7 while the park will close at night.

The Pink part is the section through a wooded area and it comes out almost opposite Frankfield Church. The path follows the path of a stream so the entrance is at the lowest part of the road here.

The route shown above from the entrance by Frankfield Church to the Half-Moon Lane / South Douglas Road junction is 2.3 kms. 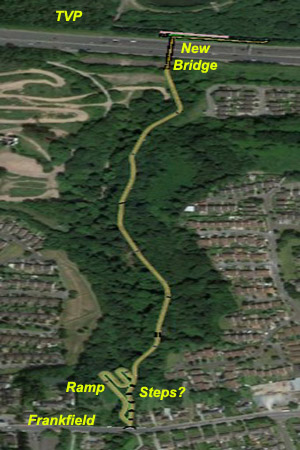 This section certainly isn’t flat! There is a 40 meter drop from the road in Frankfield down to the new bridge. It curves a bit to lessen the gradient but it’s still a climb.

The press release continues…”In recent months, pedestrian and cycle access to the 160 acre Tramore Valley Park was further improved following the upgrade of the junction at Half Moon Lane and South Douglas Road.

It is expected that works will be completed in early 2023.”

This might seem like just a bridge but it’s a big deal for anyone living in this area. It opens up a completely new route for walkers, cyclists and runners alike.